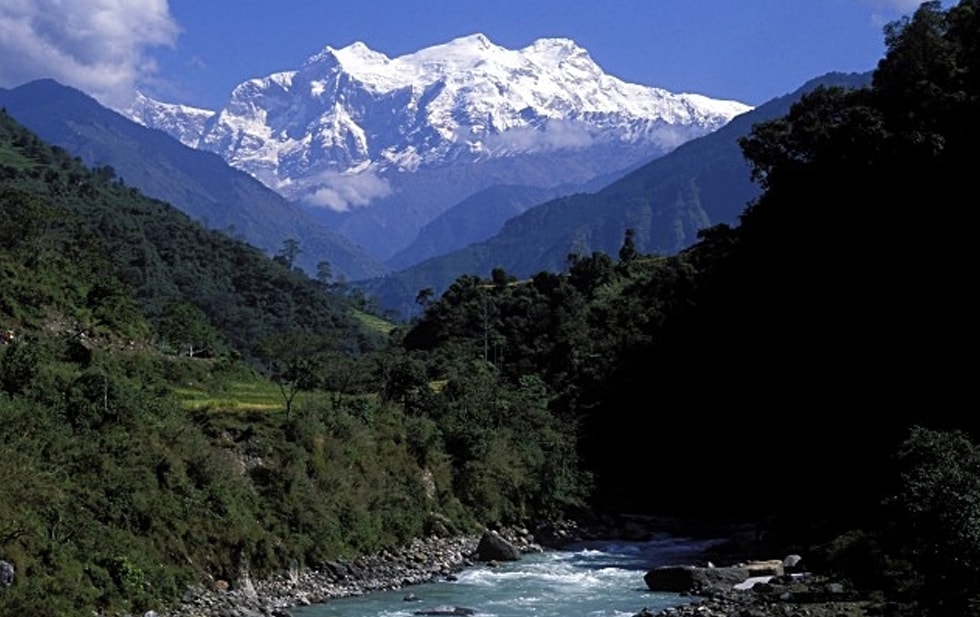 Manaslu Trek is a well-loved trekking route, providing with pure wilderness,pristine mountain views, rich culture and genuine adventure sum up the trek experience around the world. Opened in 1992, this area is protected by Manaslu Conservation area, established in 1998. Manaslu at 8163 meters (26,775′) is the 8th highest peak in the world.

The route around Manaslu & Larkya la Trekking offers great views of Himalayan landscapes with spectacular views of is the 8th highest peak in the world and the Ganesh Himal Range, Annapurna among others 45 more peaks over 6500m. Furthermore, Manaslu trek offers cultural heritage, a genuine outing in the outback, incomparable beauty and biological varieties that’s amazing.

Manaslu has a lot to offer to trekkers, from the beautiful scenery of the majestic Himalayan ranges and high altitude glacier lakes to rich biological and cultural diversity. Ecologically MCA has a diverse range of habitats which boasts many rare flora and fauna such as Snow leopard, Lynx, Musk deer, Red fox, Jackal, Brown bear and their prey species such as Blue sheep, Himalayan tahr, Himalayan serow, Wooly hare and Himalayan marmot. It is also home to a variety of birds like Snow partridge, Tibetan snowcock, Chukor partridge, Himalayan griffon, Golden eagle, among others, including diverse plant communities.

The culture of the people in the region is equally unique with most people of Tibetan origin following Buddhism. Economically, the people rely on agriculture and animal husbandry system, and are very dependent on natural
resources for firewood, timber and medicinal plants.

The rich cultural heritage is evident in the several large Buddhist monasteries. Local examples of the harmony between religion and environmental conservation can be seen throughout the region, as Lamas (religious leaders) from the monasteries prohibit any kind of violence against wildlife. This has been hugely consequential in the prosperity of wildlife in MCA.

Manaslu circuit trek is one of those delightful adventure treks in Nepal. The magnificent views of the Annapurna and Dhaulagiri peaks reward you on trek. Furthermore, that is literally gratifying to the soul along the way. Despite, the taxing drills of this trek, Mt. Manaslu located in the east of Annapurna Himalaya range.

Manaslu circuit trek can be organized private or group trek on your request. While trekking in Manaslu area, you can stay at local lodges which is called Tea house trek as well. Tea houses are more like hotels, with hot showers, western food, and private rooms (twin sharing). In this arrangement overnight halts with dinner and breakfast will be in Tea-houses (Lodges) and lunches in local restaurants en-route. Freshly cooked food is served at all
times (western, continental and Nepalese, Chinese, Indian and Tibetan meals are available in all places).
Furthermore as you will be staying in locally owned lodges you will be benefiting and interacting with the local community. It will give you a true feel for the Nepalese people and their lives.

This remarkable adventure Manaslu & Larkya la treks begins with an interesting scenic drive to Soti khola bazzar via Arughat, a small market centre in the district of Gurkha region, passing nice traditional villages like Jagat, Samagaon, Dharam sala and the trek crosses the high pass of 5,200m at Larkya La and the journey completes at famous Annapurna circuit trail at Beshisahar after a delightful and memorable time in the high
Himalayan mountains with Unique Path Team.

Hotel accommodation in Kathmandu with breakfast at 2 to 3 stars level, Meals 3 times a day (Breakfast, lunch and dinner) during the trekking, Twin sharing comfortable private room in trekking, all the ground transportation as per itinerary, an experienced trekking guide and all the necessary permits, please find in details below what are included and excluded at the price as follows:

After the 11 days trekking with Rajendra and staff from the Unique Path Company. I found the Annapurna sanctuary is the perfect place for relaxing, exploring as well as challenging myself. I would recommend my friends to come in the future. All staffs from Unique Path were well trained, responsible and taking care of us very well. I will trekking in Nepal again with Unique Path in the future.

Some words about our trip – Jiri to Base Camp “Our 26 days of trekking was amazing and we have no regrets of using Unique Path Trekking & Expedition whatsoever. Next time we will organize our trekking again via Unigue Path. We appreciate the professionalism displayed by your organisation. We are looking forward to meeting you again personally in Kathmandu soon”. Kind regards

Rara Lake Trek offers the best scenery on the north-western most side of Nepal Within its confines lie ...

Upper Dolpo Trek crosses three relatively high passes, good paths are followed throughout and there is ...

Trekking in Rolwaling is one of Nepal’s finest high mountain valleys West of the Khumhu, directly ...

Makalu trekking in eastern Nepal is protected by the Makalu Barun National Park and Conservation Project ...

Ganesh himal trek not frequented by many tourists and it situated in central Nepal, northwest of ...

Mustang trek is an extension of Tibetan plateau, a multiple scenic adventure leading from Kaligandaki ...

Kanchenjunga Trekking, Mount Kanchenjunga, one of the world’s most spectacular mountains, is ...