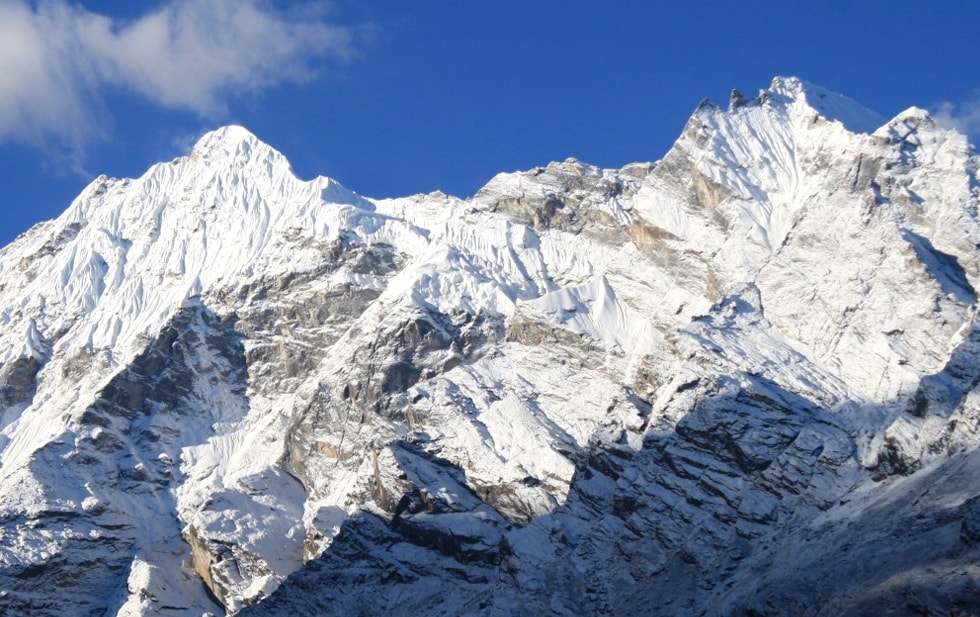 Unique Path adventure to Ganesh Himal Expeditions at 7, 422 meters / 24, 350 ft high summit, this mountaineering climb leads to one of the world’s best trekking destination in the awesome Ganesh Himal area west of Langtang and east to worlds highest Mt. Manaslu range with fabulous scenery everyday during the trek and climb of Ganesh Himal also known as Yangra.

The highest peak in the range is Ganesh I (Yangra) at, 7,422 m /24,350 ft high, there are three other peaks over 7000 meters and with 14 others over 6,000 meters within its massive range, the first successful climb was by a Franco-Swiss Expedition team via the Southeast Ridge in 1955.

Unique Path adventure to Ganesh Himal Expeditions leads to awesome picturesque country in the heart of huge bulk of Ganesh Himal range of mountains within high country and through Tamang Heritage Trail.

Gaensh Himal climb is technical includes ice and rock climbing in most of the places till to the summit top, offering grandeur view of surrounding peaks and close view of the Tibetan plateau, as this range lies on the rim of Tibetan border line.

The climb is high technically, should be familiar with the use of your equipment, crampons, harness, ice axe, tying knots and handling climbing ropes. Most of the climbing will be involved walking roped together, including the glacial crossings. This is adventure to Ganesh Himal for the experience mountaineers who have done previous climb in the Himalaya and in Alps mountains.

Starting this wonderful adventure with an interesting drive overland to Syabrubesi for Ganesh Himal Expeditions with more than six hours journey to Syabrubesi, door to Langtang valley, Ganesh Himal and to Tibet border, from Syabrubesi towards North West past traditional and cultural Tamang villages of farm lands to Ganesh Himal Base Camp.

On leaving the last human settlement and villages for complete wilderness heading to higher region through enchanting rhododendron, pines and oaks forest towards wild country in the harmony of high mountains and nature leading at moraine and ice with rocks and boulders to establish Ganesh Himal Expeditions base camp, high camp and beyond further two more camps before the summit bid of Ganesh Himal at 7, 422 meters high, at the base camp and high camp with proper rest and acclimatization for the big day and the highlight of this adventure.

Climb is much technical on snow and ice fields for some time and then heading towards the top summit where our expert guides will maintain the route fixing ropes and snow bar where necessary in some technical sections on route to the top. After a vigorous climb reaching the summit of Ganesh Himal with fabulous views of surrounding high mountains in the far west Annapurna, Manaslu and adjoin peaks of Ganesh Himal with Langtang to North East Jugal Himal range and extending towards Dorji Lakpa to Mt. Gaurishanker, Melungatse, Phubagyache in the far eastern horizon and of Tibetan plateau towards North.

After a great time in the hidden areas of upper Ganesh Himal area heading back to Syabrubesi village in the comfort of cozy lodge after camping nights on climbing period and then a drive back to Kathmandu after a successful hard climb of Ganesh Himal with grand service of Unique Path and its cheerful team of staff and guides.

Our trip to Nepal was truly an adventure. We all have had many stories to tell of our experiences during the trek. Our group became a close knit family within the weeks of travelling together. We all appreciate the care and dedication your staff showed in order for us to enjoy Nepal to it fullest. Jeevan and Tilak took special care in assuring our safety and comfort. The entire staff along with porters and cooks were excellent in seeing to our day to day needs. Tilak provided a wealth of information about Nepal and the people. It was a learning experience as well. The trip was such a success, we will certainly consider a future trip to Nepal with Unique Path. Thank you for such a great adventure! Your friends,

Even if over 60 our trekking experience was fantastic: nature, culture, different ways life, a professional guide ( Mr. Dambar ) , Rajh and three very good and kind porters ( Arjun, Resham, Som ). Thank you very much for the great trip!! Regards

Wow, What a fantastic trip!! Thanks so much. It was so well organized and easy for us, right from the moment we landed at the airport. The trip was really well paced, with enough time to relax and look around at reach stop. Raj and Janak were fantastic, teaching us lots of Nepali and giving us lots of information. Thanks a million, it’s a holiday I won’t forget for a while.

Myself and husband have just completed the Everest Base Camp and Gokyo Ri. It was a 20 days trip and we enjoyed everyday. Our guide Ram was excellent and very professional. Unique organized our accommodation in Nepal as well as Chitwan leaving us nothing but to enjoy our holiday. Thank you again Unique Path.

Unique Path to Kumsum Khanguru Peak Expeditions at 6, 382 meter located high in the Khumbu district of ...

Unique Path to Mt Nuptse Expeditions at 7, 855 meters, first summated by British expedition from the ...

Unique Path to Pumori Expeditions at 7,161 meter located high in the Khumbu district of Sagarmatha zone ...